I thought I'd do a comparison for this months BB and Glambag. 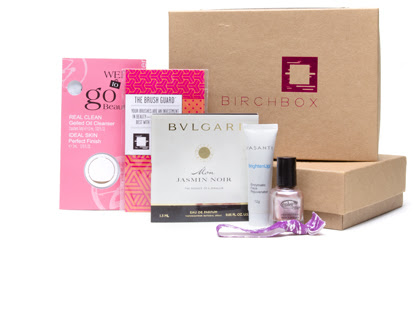 This was my Birchbox this month. I wasn't too thrilled with it, but I'll give a quick breakdown:
BVLGARI Mon Jasmin Noir: Perfume. It was really strong smelling and not my type. Went straight to the garbage.
WEI™ to Go Sleep Over Kit: Real Clean and Ideal Skin: Make up item! Cool to try, but not interested in it. Something that I could easily get for free. Not really impressed.
Vasanti BrightenUp! Enzymatic Face Rejuvenator: A face thingy. Some sort of brightener? What? Basically used as a wash. It's interesting, but I do have a good face routine. I'm also hoping this doesn't hurt my sensitive skin.
Birchbox and Color Club® Custom Collection: A light pink metallic! It's a tiny size, which I didn't mind. The color just isn't me. And the last polish they gave me was metallic. Boring.
twistband™ Lace up for Fall: This was cool. I bought some before and I like them, but I just got a single one. I'm probably a bit picky about this, but I just looks silly in the box with everything else.
The Brush Guard Variety Pack: This is a cool idea! Was an interesting concept. I might get some use out of them when I travel. We shall see.

Honestly, this is the lamest Birchbox I have ever received. Looks like it cost them nothing to put together and it all just fell flat.

So I don't have a picture of my GlamBag because I'm lazy, but it's the same for everyone. So here's the quick breakdown:
SOHO Smudge Brush: Yay! A brush! This is fab! I can never have too many brushes! I haven't used it yet, but I am quite interested in trying it out!
Carol's Daughter Monoi Repairing Split End Sealer: Who has split ends? This girl. That's the trouble with fine, frizzy hair. This product will be great to use. I am so happy with it!
Jane Sparkle Gloss: Although this gloss doesn't last very long, it's a very nice color. And, I happen to love lip products! Another win for me!
Mirabella Eye Colour: This is a pretty neutral pinky-brown color. It's slightly pearlize and silky. I like it a lot. I could never have enough eyeshadow so this made me super happy!
Circus by Andrea's Choice Nail Color in Tightrope: Another circus polish? Yes please! I love me some nail polish! While I'm not sure about the color, I am pleased to have another full size polish in my collection!

How amazing is this bag? This is by far the best month of GlamBag I've gotten. Kind funny considering it was my worst Birchbox month. Oh well. (:
Posted by Rachel at 7:27 PM No comments:

The Loofah: A Review 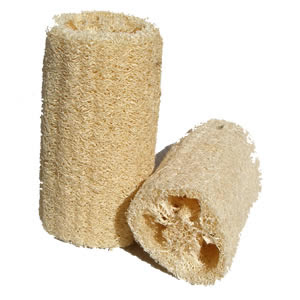 BEHOLD! THE MAGNIFICANT LOOFAH! I honestly never though I'd own a loofah, really. I played around with my moms when I was younger, but it always seemed scratchy to me. Why would someone subject themselves to a scratchy object?! So, I pretty much forgot about them until a month ago.

Up until recently, my skin was actually quite smooth. I really didn't need to do much with it. Then, suddenly, I was attacked by dead skin cells! I could literally scratch off them from certain spots in the shower. What the hell? It was like I had a layer of them sitting on top of my awesome skin. I have no idea how my skin changed so much, but, I was not pleased.

After dealing with my skin not feeling as clean as it should, I went on a mission to find a way to make it baby smooth once again. And honestly, my skin was also grossing me out. My first step was the buy a body brush. That would exfoliate me! It's rough! It HAD to work. Yeah, nope. It didn't seem to change much. It also kind of hurt. So, my next thought was "Maybe I needed something to exfoliate with the brush. That would make sense." So I bought an exfoliating body wash. After using it a couple of times, no dice. What was I doing wrong.?

For some reason, I thought that lotion was the key! Maybe it was actually dry skin and not dead skin! Genius! And, you know what, it actually was genius. But not in that way. My body needed lotion. So, it was a good buy, but my skin was still feeling blah.

After almost giving up hope, I decided the internet had to have a solution. And that's when I stumbled across the loofah. Seemed simple: Get it wet, massage it a little, and rub it on your body! And the price was cheap. I got 2 for less than 6 dollars.

When they finally arrived I dragged a loofah and my boyfriend into the shower and followed the instructions I read online. As soon as I dried off, I touched my body. SO SOFT! What did this magical loofah have in it? It didn't even feel like it was exfoliating! Maybe it tricked me? So I scratched at one of my bad spots. Nope! Nothing came off! I squeal in joy and told my boyfriend that my skin was as soft as his and forced him to pet me. He obviously didn't mind that. He also agreed that it did feel soft.

So, now, a month later, I still love it. It doesn't hurt my skin and it makes it feel so amazing! I will forever use a loofah as long as my skin needs it. And if you were having the same problem as me, pick one up! You might be quite surprised.
Posted by Rachel at 5:55 PM No comments: